Posted by Unknown at 8:57 AM No comments: 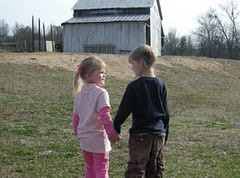 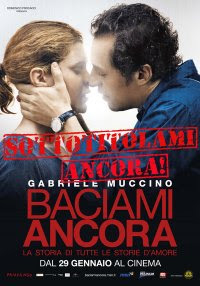 Children who have cochlear implants (CI) rank their quality of life (QOL) equal to their normally hearing (NH) peers, indicates new research in the February 2010 issue of Otolaryngology - Head and Neck Surgery.

A cochlear implant is an electronic device that restores partial hearing to the deaf. It is surgically implanted in the inner ear and activated by a device worn outside the ear. Unlike a hearing aid, it does not make sound louder or clearer. Instead, the device bypasses damaged parts of the auditory system and directly stimulates the hearing nerve, allowing deaf or severely hard of hearing individuals to receive sound. The National Institutes of Health estimate that as many as 59,000 people worldwide have received cochlear implants, with roughly half of those in the pediatric population.

Prior research has indicated that deaf children feel less socially accepted, experience more difficulty in making friends, and demonstrate greater adjustment problems than their hearing peers. The subsequent success of the multi-channel CI devices that improve speech perception and language development led researchers to look beyond speech and language performance to questions of psycho-social behaviors and adjustment.

Results of the questionnaire revealed that overall QOL did not differ between CI and NH groups. However, examination of individual subscales revealed that 8-11-year-old CI children rate their QOL with family less positively than their NH peers. Younger CI recipients rated overall QOL more positively than the older 12-16-year-old CI group. However, the authors point out that this could be a reflection of standard adolescent behavior. Overall QOL showed a significant inverse association with age at implantation, and a significant positive correlation with duration of CI use in the 12-16-year-old group.

The authors point out that even though prior studies have assessed QOL in CI children, this study adds additional perspective to the literature, as it combines assessments by the actual CI recipients and parents, and it maps the results in context with NH children. In addition to findings about how CI children rank their QOL, the research reveals that parents proved to be reliable reporters for their children in areas where they could observe and participate.

The authors write, "For profoundly deaf children who regularly use a cochlear implant, feelings about life overall are no better or worse than their hearing peers. These findings indicate that cochlear implantation has a positive effect on certain psycho-social domains."
Source: American Academy of Otolaryngology -- Head and Neck Surgery
Posted by Unknown at 12:55 AM No comments: Researchers at Children's Hospital Boston and Harvard Medical School have just published a new study on children whose hearing loss is caused by connexin 26 mutations. They wanted to know if hearing loss caused by connexin 26 remains unchanged or worsens. They monitored the hearing of about one hundred children for about 10 years to see what happened. Read on to learn what they discovered.

Background: Connexin 26 is a protein made in the cochlea. (It is coded for in our DNA by a gene called GJB2.) The exact purpose of the protein is not known for sure, but it is thought to help regulate the balance of potassium in the supporting cells. If the potassium balance is wrong, the supporting cells die, and there is evidence to suggest that if they die, the sensory hair cells -- those that pick up sound vibrations and stimulate the auditory nerves -- die also. 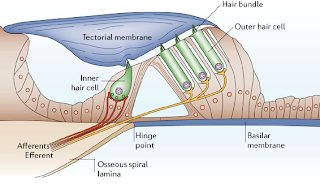 A cell-level view of the sensory part of the cochlea (from http://www.nature.com/nrn/journal/v7/n1/fig_tab/nrn1828_F2.html) (You don't need to try and understand this picture if you don't want to -- it's just for decoration.)

Connexin 26-caused hearing loss is typically inherited in a recessive fashion. In this case, each parent, usually unknowingly, has one healthy and one mutated copy of the gene. If a child inherits a mutation-carrying copy from both parents, the child will have hearing loss. (More details about how hearing loss is inherited can be found in the booklet you can download here.)

The Research Study The new research described here was carried out by a group of geneticists, otolaryngologists, and audiologists. A total of 126 children were included in the study. Of these children, 33% already had profound hearing loss when their parents agreed to take part in the research. Their hearing loss could not get any worse, so its progression couldn't be studied. The rest of the children had hearing losses somewhere in the mild to severe range when they first enrolled in the study.

Does the hearing loss progress? This was the first question the researchers asked. They found that in just over half of the cases (56%) the answer was yes, the hearing loss did get worse. The rest of the children seemed to have stable hearing levels over time.

Does the type of mutation determine whether it will progress? Many different hearing loss-causing mutations have been discovered in the gene for connexin 26 since it was first discovered in 1997. Earlier research showed that these different mutations can have different effects. Those that cause the protein to not be made at all are the most damaging and usually cause more severe hearing loss. Those that cause it to still be made but in an altered form usually cause less severe hearing loss. What was not known is whether certain kinds of mutations are more likely to cause hearing loss to worsen. This new study revealed that there is no correlation between the particular mutations a person has and whether or not the hearing loss will worsen. In other words, there is no crystal ball. However, for the children whose hearing loss levels did worsen, changes were detected on average 13 months after their hearing loss was first discovered. (A graph in the article shows a pattern of fairly rapid progression over the first year or two followed by a gradual leveling off.)

Why might some individuals' hearing losses progress while those of others with the same mutations stay the same? The researchers wrote that they don't know, but that there could be additional, as yet unidentified, modifier genes or environmental factors involved.

What does this mean for parents? While it would have been nice for parents to have a more definitive prediction of whether or not their child's hearing loss would progress based on which connexin 26 mutations they have, at least knowing that the odds of it being stable are 50:50 is something. Also knowing that progression, if it is going to happen, would likely be seen in the first year or two after the initial diagnosis gives parents at least some time-frame over which fret. Inevitably, our (genetically programmed??) individual human natures will determine just how much sleep we lose over this knowledge.

The full article is published in the Archives of Otolaryngology - Head & Neck Surgery:

If you would like a copy of the full article, email me.
Lydia is the parent of a child with bilateral cochlear implants and hearing loss caused by connexin 26. She is also an audiology graduate student.
Posted by Unknown at 4:46 AM No comments: