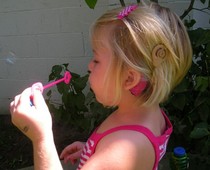 ScienceDaily (Nov. 15, 2010) — Pinpointing the exact genetic cause of inherited deafness has always involved sequencing one gene at a time, a process that can take up to a year and cost roughly $1,000 per gene. It would cost around $75,000 to test all known deafness causing genes using this approach.

Now University of Iowa researchers working with colleagues at Baylor College of Medicine have developed a test that can screen all of the genes known to cause deafness in a single run, in one to three months and for about $2,000. It means quicker answers for families anxious to determine treatment options or learn the likelihood that future children will have hearing loss.
The new test, called OtoSCOPE, will be available through the UI's Molecular Otolaryngology and Renal Research Laboratory (MORL) by spring 2011 to clinicians and patients within the U.S. and potentially in other countries...


"There has been genetic testing for hearing loss for over a decade and our laboratory was one of the first in the country to offer it," Shearer said. "But traditional gene sequencing can only look at one gene at a time, which can be prohibitively expensive and time consuming. We will be the first laboratory in the world to offer genetic testing for all known hearing loss genes simultaneously, which will significantly increase efficiency and decrease cost."
Hearing loss is a very common problem. It affects 1 in 500 newborns and an estimated 278 million people worldwide have moderate to severe hearing loss. About two thirds of hearing loss is inherited and can be caused by mutations in many different genes.
"Genetic testing can provide information on whether the hearing loss will be severe, moderate or mild and whether it will progress," Shearer said. "It can also give information on the chances that another child born in the family will also be affected by hearing loss. Finally, genetic information can help determine the best options for treatment. We often know, based on what gene is affected, whether cochlear implants or hearing aids are the best treatment to improve hearing."
Cliccate qui per leggere l'articolo.
Posted by Unknown at 8:41 AM